The Costa Rossa is officially now washed by the most beautiful sea in Italy. No less an organization than the FEE has this year awarded the Blue Flag to two new locations in Northern Sardinia and La Marinedda and the Spiaggia Longa at Isola Rossa, near the town of Trinità d'Agultu, are now part of the pantheon of dream beaches. The requirements that the award winners have to meet are particularly stringent, based on the Uni-En ISO 9001-2008 protocol which concerns the quality of bathing water, separated waste collection, the presence of pedestrian areas, street furniture, green areas and beach services.

But first and foremost the beach at La Marinedda is an oasis in a unique natural setting between purple rocks and the green Mediterranean macchia or vegetation, a crescent of white sand on the Golfo dell’Asinara protected to the east by Punta Canneddi and to the west by the Isola Rossa promontory and able to offer all the comforts and facilities required for a relaxing holiday in Sardinia. The most active and energetic can indulge in numerous games and water sports including windsurfing, SUP, canoeing or the use of pedal boats even if the most popular activity is surfing.

The bay at La Marinedda is in fact one of the destinations most appreciated by surfers from all over Italy and is home to the famous contest that attracts internationally renowned athletes every year. 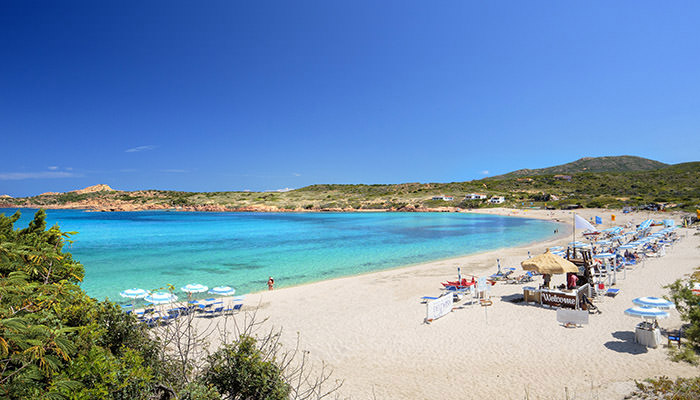 The Hotel MarineddaThalasso & SPA, in front of the public beach of the same name is the only 5-star hotel on the Costa Rossa, ideal for spending a holiday dedicated to well-being and good taste. The beach, 200 metres from the hotel's main pool, is equipped with sun loungers, umbrellas and a beach bar where you can cool off with a drink and which is also equipped with a comfortable changing room and shower.

And during your holidays at the Hotel Marinedda you can visit a Blue Flag beach every day!

The Spiaggia Lunga at Isola Rossa, which received the Blue Flag this year, can be reached in 10 minutes walk while in 15 minutes by car you can dive into the sea at the Li Junchi beach at Badesi which was awarded Blue Flag status in 2016. Santa Teresa di Gallura is easy to reach and its three beaches were awarded Blue Flag status by the FEE while from the tourist marina at Isola Rossa you can set sail and head off on an exciting boat trip to visit the La Maddalena Archipelago and its fabulous paradise beaches.